My name is Garrett Johnson, and I’m an RPG player.

Mention playing Dungeons & Dragons to an acquaintance or co-worker and be prepared to defend yourself against an onslaught of questions like “does anyone still play that?” or images of greasy teenagers gathering in their parents basement. Surprisingly, Dungeons & Dragons (D&D) and other RPGs (role-playing games) are gaining mainstream momentum with the popularity of indie board games, open-world video gaming, podcasting and webseries (HarmonQuest and Critical Role), and the Stranger Things fandom. From April 27-29, Shreveport gets its first public convention dedicated to D&D and other RPGs with Red River RPG Con and the event is sure to connect RPG gamers from across the region.

Organized by Eddie Bartlett and Matt Gullett and located at the Clarion Hotel’s event room, Red River RPG Con utilizes the Tabletop event platform to organize a slew of RPG games into four hour sessions, connecting Game Masters (GMs) who host the games to 4 to 6 players in a campaign. “If you are new to the hobby, this is a perfect place to dip your toes in the water” explains Bartlett. “There is no homework required, nothing you need to purchase or bring.” Games range from Call of Cthulhu, which is a Gothic horror game, Paranoia, a humorous shoot first-think later style game, Dungeon Crawl Classics (DCC), which is a real throw back to the olden days of Dungeons and Dragons, as well as Star Wars and Pokemon based games. As of this writing there are 39 games created that you can join! Want to host a game? The deadline is April 1st. With all that selection, where do you start? Great news for those interested in participating in their very first game, these four hour sessions are tight, one-off missions as opposed to a full D&D campaign which can last years. According to Bartlett, “Two of the biggest barriers to entry I think are, not knowing how to play and not having anyone to play with. Come out to the con, we will happily teach you the games, and meet people you’d like to play with in the future. Meet some really nice people at your table? Get contact information and try and start a group. We’d love to help build these new game groups.” Due to RPGs being social games, attendees can expect a welcoming environment a huge variety of expertise.

Outside of the classic D&D and its variant Pathfinder, expect to find unique games like Call of Cthulhu, where your character will probably die before the game is over, and X-Crawl which offers gladiatorial combat. Eddie Bartlett says he’ll be running a game of X-Crawl on Friday night. “It will be a charity game. Our charity is Camp Rainman, a camp for persons with autism, ages 10 & up. So in my game, for donations, players or spectators can make the game harder/easier and generally wreak havoc, it should be a ton of fun for a good cause.”

Including Eddie’s game, all games on Friday will be for various charities and GMs will offer “dollar rerolls” where you can reroll your dice to give you character a second chance at using an ability or to get a new lease on life. For Saturday and Sunday, in addition to the RPG games taking place, there will be a raffle for prizes and space for vendors. Expect to see Dragon’s Lair, Frog God Games, New Big Dragon, author Lela Robichaux (Dragons of Cantor), Crystal Elf Designs, Multiverse Games, and Dirthen’s Bags of Holden. There is a restaurant located at the host hotel for food and drinks, and anyone who hosts a game at the Con receives free snacks and drinks during their game.

“I completely, freely admit, we’re a tiny convention now, but if you will support us, we will grow this for you to have and enjoy in your local area,” says Bartlett. “Consider us the little, level one character trying to start our adventurer. Alone, maybe we get squashed first time out, but in a group, there’s nothing we can’t do, and I intend to do this for years to come.”

I wanted to ask other RPG players what they love about these games and why they’ve endured in our community, surviving and thriving alongside video games.

Eddie Bartlett believes “It can also be a little lonely celebrating your Skyrim victories, with something like D&D you are part of a team. Someone else making a brilliant move or rolling that desperately needed crit, can be even more exciting that anything your character has done. Those are stories you can share for years, and trust me, we’ll tell you them.”

Nate Treme, who has been playing RPGs since 2011 including Dungeons & Dragons 3.5, Dungeons & Dragons 5th edition, Dungeon Squad, The Black Hack, and Maze Rats thinks: “It’s not scripted or programmed so gameplay isn’t limited by what the game’s creator has already planned. It’s also versatile and can be played differently by different people. You can customize game rules to fit the way you want to play. And you can play without anything but dice and paper and pencils. And you could even replace all that with a smartphone if you wanted. The barrier for entry to both play and create games is very low.”

Matt Haynes, who currently is the GM for my game group, has been playing for 17 years and does a terrific job of welcoming new players and creating an imaginative world to explore. According to Matt, he loves RPGs because “in a video game, you’ll hit a wall the designers established when they felt they’d developed enough of the environment to satisfy their idea of immersion or once they reached the end of their budget. In an RPG with a good DM and great group of players, those limits don’t apply. The only thing holding you back is your imagination. No matter how good the graphics or how non-linear a video game seems to be, the lack of those boundaries is very appealing to many gamers.” Matt also loves that these games that sometimes last years (like our campaign) has a lasting impression on its players. “Those shared experiences have created and will continue to create life-long bonds within the gaming community and among friends,” says Matt. “That’s some of the strongest magic that RPGs bring into the lives of the people that play them.”

After enjoying video game RPGs, Caz Robledo started rolling dice in just the past two or three years. Caz likes that she is “able to see friends I like to hangout with every other week, catch up, and then watch us develop our characters and a world built just for us. It feels nice to be part of something like that, and we all contribute to some aspect of the story, good or bad. The decisions and certain actions we do in game also have consequences, so it’s always a surprise to see what the DM decides to do, one small thing could later affect us greatly in the game or that one person who we decided to spare could bite us in the ass later.”

I also asked my friends what is one major misconception about the Shreveport RPG community, or RPGs in general that they would like to set the record straight on. The one thing they all agreed on is inclusivity, both for new players and for new parts of our community, which is something that really makes Red River RPG Con a great addition.

According to Matt Haynes, “Housewives, lawyers, personal trainers, actors, contractors… people from all walks in life are finding RPGs to be a wonderful form of shared storytelling that really allows them to lay aside the mantel of who they are in their day-to-day life and become something else for a few hours.”

Nate Treme sees RPGs as being welcoming to new players, and the misconception that it’s convoluted with rules. “There are so many RPGs with simple rules that anyone can pick up in just a few minutes.”

Caz Robledo tackles a major misconception headon: “That it’s mostly males playing it. That’s not true as far as I can tell. I’ve met other female players and had others show interest in the game. It’s a great game and to be honest a great way for socialization. Even kids can play it.”

If you’re interested in RPGs I strongly encourage you to grab some friends and sign up for a four hour session or two during the Con.

If you can’t make it or you want to start a full campaign, here are a few resources: 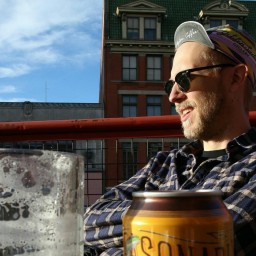