There are a few things that I want to mention in this piece, and make no mistake — I love The Blind Tiger. More than that: I miss it, and I know that I am not alone. Anecdotal as the points of evidence may be, there are many people in the area that I have spoken to who fondly remember going to The Blind Tiger for a lunch po’boy, which has become just one of the several classic memorable items that were once regularly ordered items, but are now somehow absent from the menu of this Shreveport fixture, a restaurant claiming to be “Cajun.” North Louisiana is my home, and I know that we can do so much better than manifesting such ignorant culinary stereotypes. I’ve seen that we can do a closer approximation to Cajun food than this.I knew these shortcomings going in. The Blind Tiger was actually my first official stop on the Heliopolis Burger Tour, and I was nervous. I chose to do a few more glowing reports for fear that this one was either un-writable or at least wouldn’t be as eye-catching. The account of this episode is one that I have been trying to prepare for as long, and it is an experience for which I had found difficulty searching for the right words to describe. Over the past several years, The Blind Tiger has been accepted as a must-visit of downtown dusk-life in Shreveport, and even recently I’ve had the pleasure of going to a few awesome karaoke nights. They are a popular spot, and not without good reason. They are a good bar, one that other publications have even raved about… but you’re here for the burger, so let’s get down to The Blind Tiger’s signature “Tiger Burger.”

The bun was toasted quite crispy, as I do like a burger bun. Even over the many years I’ve spent eating burgers of all kinds, I have still only come to hope — never to expect — for a toasted or grilled bun. It is a crunchy-crumbly luxury that will always pleasantly surprise, never be held to be a standard requirement in burger construction.

The flavors of the meats included seemed to compete for attention: Canadian bacon and smoked bacon bits, which, if I can get ham-nerdy here, are two comparably textured but distinctly separate parts of a pig, either of which are typically prepared in very similar ways. The former was sweet, seemingly candied; the latter was earthy, like a delicious salty campfire, which is the one of the two flavors that I would prefer to pair with the montery-cheddar cheese combination underneath them.

All of this was melted atop the patty itself, which was thin but very well held-together. It was neither dry nor greasy, but it was definitely lacking flavor. I would have more easily forgiven a fall-apart hamburger patty if it had at least had more spice to it.

Obviously the whole of The Tiger Burger is worth more than the simple sum of its individual parts, but in this case even those parts don’t add up to much. There was but a single leaf of lettuce and a tiny slice of onion on the side to be added as a topping at my discretion, but no tomato, slices of pickle, interesting sauces or dressings, or even any spicy seasonings — in short, what I had expected to be a burger with at least some sort of Cajun twist, I was expecting some sort of flavor. This simple beef short-stack needed more oomph.

I was so disappointed with this burger interaction, that I actually went back again almost a week later, assuming that maybe I had caught them on a bad day the first time, or maybe the lunch rush had put them at a shortage of supplies. This was more of a chance than I might be willing to give many other restaurants, because I so wanted this to be a more positive write-up. I went on a busy night; one that I thought for sure might have yielded more interesting results. Even after asking for extra onion, it was not enough. I sadly ended up taking the last half my burger to-go , put it in my car, and went proceeded on my drinking adventures around downtown Shreveport with friends for a few hours. I did not feel guilty at all concluding my night by getting a spicy beef burrito with extra salsa from the mobile food coach on the Texas and Spring St corner, right across the street from The Blind Tiger.

I feel that at this point, I need to specify that “The Tiger Burger” is not a bad burger. It’s just boring. A simple burger can be great, but in this case the expectation belies the reality, and the Cajun reputation that follows was a set-up for disappointment.

Definitely go for the fries though. I could eat a truckload of those things.

I hope that this article does not serve so much as a cautionary tale to readers that might assume that I’m lampooning a classic Shreveport spot, nor do I want for this to be in memoriam. I want people that agree with me to likewise demand the flavorful, spicy, delicious Cajun food that we who live here know that North Louisiana is capable of producing.

I also feel the need to mention again, as I did when this NWLA Burger Tour began a month ago, that I have no intention of ranking or pitting hamburger restaurants against each other, as some competing publications may aim to do, with insufficient statistics and unreliable survey results. I do not intend to tell you which in the area is the “best burger,” because that kind of subjective food-ranking is inherently disingenuous. There is no such thing as a “best burger.” The purpose of this article series is to shine a light on locally produced food and where to find it. I have no plan to visit a national chain, because this is as much about the delicious food as it is the local business. That’s why I’m writing this for Heliopolis: our beliefs on the focus of local business are in harmony.

If you came here to read a biased, cheaply ranked listicle of the area’s highest-advertised fast-food burgers, you’re in for a surprise. 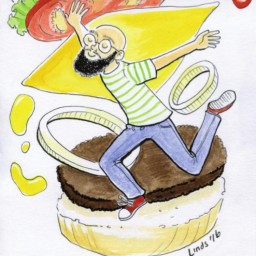